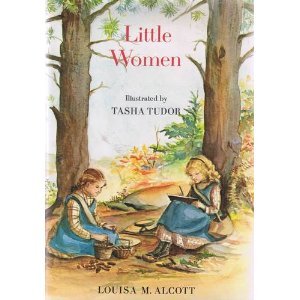 If anyone asked my nine-year-old self what was my favorite book, they would have gotten the unequivocal and quite enthusiastic answer, “Little Women by Louisa May Alcott…of course!”

I found in the March sisters a group of girls that I was destined to be friends with. The moment I first glimpsed them grumbling in their living room about the dreadfulness of being poor, I thought, Aha! Kindred spirits.

Little Women is a coming of age saga following the lives of the aforementioned March sisters (Meg, Jo, Beth, and Amy-four girls who range in age from sixteen to twelve at the novel’s beginning) and the boy next door, Theodore (Laurie) Lawrence, who becomes best friends with the second oldest sister, the tomboyish Jo.

The Marches live at Orchard House, and when the novel opens, we see that they are a family of reduced circumstances (hence, the grumbling in the opening scene). Their beloved father is away fighting in the Civil War, leaving the girls in the watchful care of their mother, whom they lovingly call Marmee. Marmee serves as the guiding force/conscience of the novel as she endeavors to shape and mold the character of her “little women.”

Over the years, we follow the March sisters’ adventures, antics, mishaps, learn about their hopes and dreams (their castles in the air), share their disappointments and losses—share their lives—and we feel as if we are experiencing it all first-hand, along with them. At least I know I did.

Some people say Little Women is saccharine, preachy, and/or old-fashioned. I couldn’t disagree more. It is a story about real people. They just happen to belong to a highly functional, loving family living in the late 1800s (if that is your idea of artificial sweetness, you have my pity). These girls don’t have it easy. The March girls work at thankless jobs for pitiful wages. They brave the freezing weather in threadbare coats with hot potatoes in their pockets to warm their icy fingers. They wear re-worked, shabby (last season’s) dresses to balls while other girls have the latest fashions from Paris. They make hard, brave choices, like choosing to marry for love when the expedient thing would have been to marry for money.

I love(d) Little Women the same way you might love a real live, complicated person: despite what I consider glaring faults, despite being—on occasion—mystified by its choices, and despite the fact that it hurt and disappointed me.

Here’s the thing: Little Women did not end the way I wanted it to. I’m not going to be a spoiler here, but I will say that Little Women is no fairy tale. The nine-year-old that I was loved a fairy tale, and this book didn’t have the happily ever after she was yearning for. At least, not in the traditional sense. More in the “and they made the best of things” sense. But, after all, in reality, that’s pretty much the way life turns out. It turns out the way it does and then you make the most of it. That was a hard lesson for me to learn as an eager, bookish kid pouring over her favorite novel, but it turned out to be a valuable one, one that was impressed upon me over the many years, re-reads, and hours spent pondering and wondering and finally coming to terms/peace with the way Louisa May Alcott chose to tell her story.

One response to “Review of Little Women”